A History
​This lovely old house, situated well back from the road, was formerly referred to as The Clary Place, sometimes spelled Cleary, but it could well claim title to The Robert Barker Jr. House, The Isaac Hatch House, The Peter Salmond House, or even The Sumner Sands Home, for such were its owners.  Also, if you wish to add an air of mystery, it could claim the thought provoking title The Annis Lot.

The exact date this house was built has not been determined, but the structural evidence dates it as the last part of the 17th century, possibly 1685.  This land was part of the original grant given to Robert Barker Sr. by Myles Standish and the house is very similar to the Alexander Standish House in Duxbury, which was built in 1666.

Robert Barker, Jr. was a man of enterprise, for in 1681 he owned a saw mill at the Brook (Herring Brook) by his father's house and in 1693 was given liberty to build a dam at Pudding Brook (West Saw Mill) where he had his second saw mill.  He was one of the first Quakers in town and meetings of the Society were held at his home.  The acreage around his home became known as the Annis Lot, tradition stating because the herb anise was raised in the field. 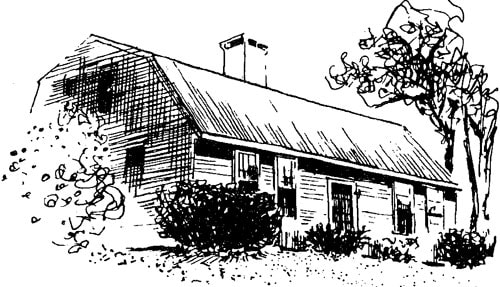 Adah F. Hall House 52 Barker Street Pembroke, MA
Robert Barker Jr. bequeathed his property to two sons, Robert 3rd and Caleb, Robert 3rd falling heir to Annis Lot August 16, 1732.  He did not hold onto his inheritance long, for on April 7, 1738, it is recorded he sold Yea Annis Lot containing 80 acres, more or less, to Joseph Dwelley for 900 pounds in Bills of Credit.

Joseph Dwelley sold to Isaac Hatch and four (4) generations of the Hatch Family grew and flourished on The Annis Lot.  In confusing New England Style, the grandson was referred to as Old Isaac Hatch, while his father, the 2nd Isaac, was known as Deacon Isaac Hatch.

The fourth generation, Josiah Hatch, sold the property to his brother-in-law, Peter Salmond, and the following year, February 18, 1853, he sold to John Clary of Roxbury, who was a housewright.  The Clarys occupied the Annis Lot for almost fifty (50) years, then sold to Annie and Sumner Sands who lived there another fifty (50) years.

Then came the Stackpole Juniors and although their occupancy was of short duration, they will be well remembered, for they restored the old house to its original simplicity and charm.

In May of 1950, Adah F. Hall purchased the premises from the Stackpoles and improved and maintained this lovely old home.  After her death, Mr. Bushrod H. Campbell, her executor, deeded the house and land to the Pembroke Historical Society in December of 1968, in memory of Adah F. Hall.
​Credits: Original research work by Clyde W. Gray of Plymouth, Massachusetts; condensed by Helen S. Melanson of Pembroke, Massachusetts.