​An unseasonably warm Sunday in November brought out 50 enthusiastic people to explore the Center Cemetery and the Loring Family/Sachem Lodge/High Street Cemetery, on a walk led by co-curators Jaclyn and Brett Robinson.
​The first stop was the Center Cemetery, where three families were featured. There has been recent work on a brick tomb in the ancient part of the cemetery, which turned out to be that of the family of Captain Thomas Turner Sr., a shipyard owner and Revolutionary War Minuteman. He and his son Thomas Jr. answered the call on April 19, 1775, although Thomas Sr. had been a lifelong soldier for the Crown until the first stirrings of the new nation. 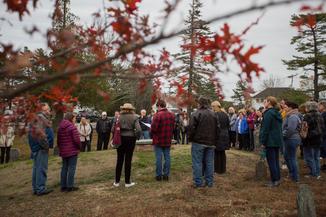 Wicked Local Photo/Carolyn Bick
​Then it was on to the grave of Lavinia Hatch, a fascinating woman who was a local school teacher and East Pembroke Postmistress, and who became involved in many charity organizations here and in Boston. She eventually became very involved in the Massachusetts Suffrage movement, and ended up on the national stage with the likes of Susan B. Anthony and Elizabeth Cady Stanton.

The third grave was that of Judge Kilborn Whitman. His daughter Frances was featured on last year’s walk, but this year participants were able to view family documents, letters, a copy of the Judge’s portrait and his actual silver pocket watch, a Historical Society Museum artifact.
​Then it was on to the High Street Cemetery, where the poignant story about a little 12-year-old girl and her father’s gift of a hat was read, as the 100-plus-year-old hat was passed around. The hat is another of the museum’s artifacts. 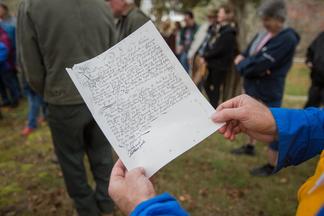 Wicked Local Photo/Carolyn Bick
​Then it was on to Hiram Randall, whose 150-year-old cane was also passed around for all to enjoy, along with its somewhat amusing history. The last stop was that of Captain Daniel Pierce, who died in 1799 in Richmond VA. Although it is not known the exact reason Capt. Pierce was in Richmond, it was during an undeclared war with France, America’s ally only 20 years earlier. It is speculated that he was somehow involved in the formation of our nation’s brand new Navy.
​
​The cemetery tour closed with the reading of Robert Frost’s poem, “In a Disused Graveyard.”
It was another successful Graveyard Walk, with many familiar and loyal faces, who have been attending for the past four years. But there were also many new attendees who came out on this autumn day to learn something interesting about Pembroke’s forefathers and mothers and their place in history.
Written by Brett Robinson, Co-Curator, Pembroke Historical Society as it Appeared in Pembroke Mariner & Express, November 10, 2017

In a Disused Graveyard
​by Robert Frost 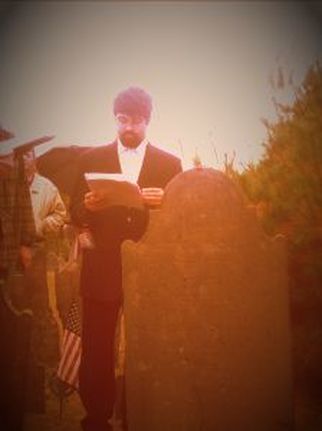 -  The living come with grassy tread
To read the gravestones on the hill;
The graveyard draws the living still,
But never anymore the dead.
The verses in it say and say:
"The ones who living come today
To read the stones and go away
Tomorrow dead will come to stay."
So sure of death the marbles rhyme,
Yet can't help marking all the time
How no one dead will seem to come.
What is it men are shrinking from?
It would be easy to be clever
And tell the stones: Men hate to die
And have stopped dying now forever.
I think they would believe the lie.
-- Robert Frost