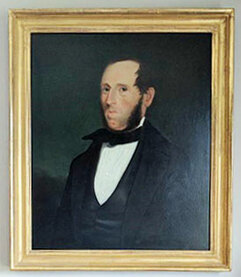 Portrait of Peleg Barker, 1793 – 1882, last male heir to reside in the Barker Homestead.
Pembroke has a long and rich history and in 1650 among the first European settlers were Robert Barker and Dolor Davis. Prior to their arrival, those people dwelling here were members of the Wampanoag and the Massachuset tribes. English land grants provided settlers large tracts of land in Duxbury, Scituate, and Marshfield of which the lands of Mattakeesett were originally a part.*

Henry Wheatland Litchfield in his 1909 book, Ancient Landmarks of Pembroke writes: “The Indian name for so much of these tracts as lies along the course of the Herring Brook, and about the Ponds, was Namassakeesett, or “Place of Much Fish”; the region now known as Hanson was called “Tunk”; and the  general term for Pembroke proper was Mattakeesett, or “Worn-out Planting Lands” - applied in reminiscence of a cultivation rather long-standing than vigorous. Whoever has traversed the arid  highlands of western and southern Pembroke, cannot fail to acknowledge the justice of this name.” Anyone who observed the annual run of herring in the local rivers could see why.


The land that is Pembroke today was originally part of Duxbury and was acquired by Major Josiah Winslow of Marshfield in what is referred to as the “Major’s Purchase.” Major Winslow purchased the lands from the Native American Chief Josiah Wampatuck (1627-1669) who was grand Sachem of the Massachuset tribe of Algonquin Indians and son of the Great Massachusetts Sachem Chickataubut.  In 1712, Pembroke was incorporated as a separate town and named for the town of Pembroke, Wales. Brookfield was considered as a name and rejected, as it was already the name of a town in Worcester County. While much of Pembroke was formerly Duxbury, the Two-Mile District near the North River that today is North Pembroke was formerly part of Scituate. The former Pembroke village of Crookertown was previously part of Marshfield.


The town has many bodies of water, including the North River and Indian Head River; Oldham, Furnace, Great Sandy Bottom, Little Sandy Bottom, and Stetson Ponds; and Silver Lake. The town’s ponds, streams and marshes are the home of herring that were prized so much that in 1741, the town began regulating the taking and preservation of the fish. The herring are celebrated each year at the town’s annual “Grand Old Fish Fry”.

The Pembroke Iron Works was established in 1720 and used iron dredged from the bottom of the ponds. Ice was cut from the ponds, stored in icehouses, and used in the summer months for food preservation. The ponds and streams also provided power for various mills, including grist, flour and sawmills. Later, shipbuilding and box manufacturing became important factors in the development of the town.
​
The town has large tracts of woodlands that provided timber for homes and industry, and provided cover for abundant wildlife. Because of its proximity to timber and location on the river, the town in its early years was known for its shipbuilding industry. The North River was the location of five shipyards – Brick Kiln Yard, Seabury Point, Job’s Landing, Turner’s Yard and Macy’s. Between 1678 and 1871, 1,025 vessels were produced on the shores of the North River.

Just before the Revolution, Reverend Gad Hitchcock of Pembroke (who had served with the provincial troops as a chaplain in upstate New York during the French and Indian war) gave a sermon in Boston blasting the British, and was rewarded for this with a set of fine new clothes from Samuel Adams. Residents of Pembroke again served with honor from the first “alarm” sent out by Paul Revere and others on April 19, 1775, till the end of the war.

The town took its current form in 1820, when the western half of town known as the “West Parish” was separated and incorporated as Hanson. Shipbuilding was among the area’s industries, with the five aforementioned yards along the North River. Famous among these were the Beaver, a vessel made famous for its role in the Boston Tea Party, and the Maria, memorialized on the Pembroke town seal. It was along the same river, on the Norwell side, that the Columbia, namesake of the Columbia River in Oregon, was launched. By the turn of the 20th century, mills had sprung up along the river, and the town’s ponds and streams provided the water for cranberry bogs. Because of rail service from Brockton, the town’s ponds also provided recreation and vacation spots for city dwellers.

A Massachusetts Historical Commission reconnaissance survey report dated June 1981 indicated that in the early 20th century the popularity of the cranberry spurred the construction of numerous bogs. By 1924 there were 17 cranberry growers in the Pembroke directory, with 14 producers listed as having Bryantville addresses. In the same year there were 14 poultry farmers listed, indicating that by that time poultry raising was well established in town. The E. H. Clapp Rubber Works, initiated on the Hanover side of the Indian Head River in 1871, expanded in 1873 to the Pembroke side of the river.

In the late 19th century and early 20th century, the ponds became an attraction for summer vacationers seeking relief from the heat in the cities. The Brockton and Plymouth Railway Co. initiated trolley service from Brockton and facilitated the development of Mayflower Grove in Bryantville as a popular summer recreation venue. The attractiveness of the ponds for summer recreation led to the development of numerous, dense cottage colonies built along their shores. The ponds are currently used for recreation, municipal water supplies and irrigation for cranberry bogs.

The Pembroke Historical Society “Preserves Pembroke’s Past” for future generations to come.