By Robert G O'Hara and Elizabeth A. Bates 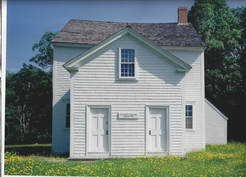 The Quaker Meeting House as it stands today at the corner of Washington Street (Rte. 53) and Schoosett Str (Rte. 139) Photo by Lance
​Editorial Note: A portion of this essay was published in the 275th Anniversary commemorative booklet entitled Pembroke: Evolution of a New England Township. Subsequent to that publication and as a result of research conducted by the authors, a vast wealth of new information was discovered resulting in this edited essay. The original author, Bob O'Hara was a friend and collaborator on this research and wrote the original essay. He was a remarkable man and a wonderful writer. For that reason, I did not try to rewrite his essay but rather present it with the additional research that we did that proved, beyond any doubt, that the 1706 Friends' Meeting House was built in Pembroke by Robert Barker, Jr. and was not moved here from any other location. -- E. Bates

The Quakers, or Friends, have been called a peculiar people for many reasons. They are recognized as peculiar by the speech they use, by their attitudes towards war, by their marriage ceremony, by their refusal to take oaths, by the way they conduct their meetings for worship, by the way they come to decisions in their business meetings and by the clothing they wear. The main reason for all these differences is to be found in the Quakers' estimate of man as before his fellowmen and before his God. It may be expressed in a twofold statement: first, that all men are equal before all other men, and second, that all men come immediately into the presence of God and need no human being to represent them before their Father, who is in Heaven. 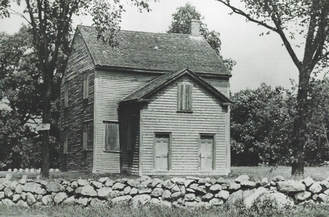 The Quaker Meeting House, Pembroke, Massachusetts. Photo Courtesy of Pembroke Historical Commission.
The founder of Quakerism, George Fox, was born in Leicestershire, England in 1624, the son of a prosperous weaver; known by his neighbors as Righteous Christopher Fox. At an early age and with scanty education, George Fox became a lay preacher. His aim was not to gather disciples about him and found a new sect, but rather to purify the church from sundry errors, doctrinal and practical.

The basis of Fox's teaching was the belief that in religious matters each soul is answerable not to its fellows but to God alone, without priestly mediation, because the Holy Spirit is immediately present in every soul and is thus a direct source of illumination, the INNER LIGHT.
​From this central belief flowed two important practical consequences, both essentially modem: one was complete toleration, the other was complete equality of human beings before the law. Hence, the condemnations of slavery which Quakers have general been foremost. In addition, they refuse to obey authority or take an oath of allegiance. They believe that the injunction, "Swear not at all," was a prohibition of judicial oaths and the commandment, "Thou shalt not kill," was a condemnation of warfare.

The sect was founded around 1647. By 1657, their converts estimated at twenty thousand. In the beginning in England, they were arrested and jailed not as much for preaching heresy as for disturbing the peace. On one such occasion was brought before Justice Gervase Bennett at Derby in 1650, "who was the first to call us Quakers," said Fox, "because, I bade him tremble at the word of the Lord." As persecutions grew worse, Quakers leadership in 1656 looked outward from England to the continent and the new world.

A view of the loft. Photo by Elizabeth A. Bates
​The Quaker reputation would precede them, and their coming was taken by Puritan leaders as an act of invasion. When the “Swan” arrived in Boston Harbor from Barbados in July 1656 carrying Ann Austin and Mary Fisher, two Quakers who had come to preach and gain converts to their sect, trouble was waiting. Both women were arrested aboard ship and immediately thrown into prison. Their books and personal effects were confiscated. They were stripped naked, searched for any tokens of witchcraft on their bodies and deprived or all light until their ship was ready to return them to Barbados.

The ideal of the Quakers was flatly antagonistic to that of the settlers of Massachusetts. It would have been impossible for the Quakers to avoid persecution had they wished to avoid it, but on the contrary, they courted it.
​The Quakers aimed at complete separation of church and state. The government of Massachusetts was patterned after the ancient Jewish theocracy, in which church and state were identified. The Quakers were tolerant of differences in doctrine; the Calvinist regarded such tolerances as a deadly sin.

In short time, the "Speedwell" arrived with eight Quakers aboard. They were all found guilty of belonging to a heretic sect and were ordered from the country.  They remained confined aboard the "Speedwell" for the eleven weeks she remained in port. All of their books and pamphlets were burned at a public ceremony. Meanwhile, Federal Commissioners in session in Plymouth recommended that laws be enacted to keep these dreaded heretics out of the land.